What's New > The administration of the French ETCP exams: a North America first!

The administration of the French ETCP exams: a North America first! 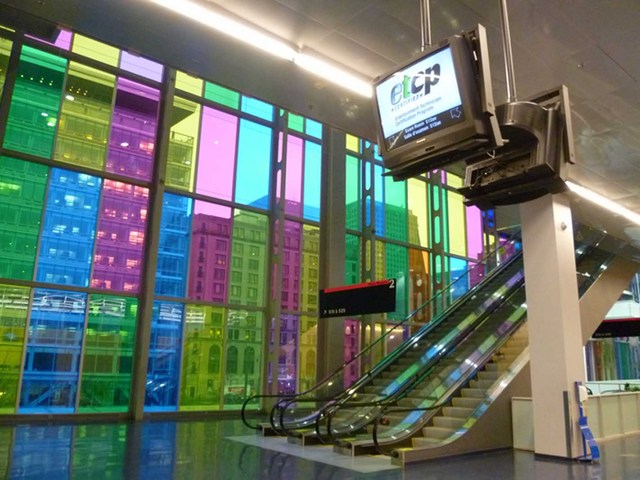 Signage on the monitors announcing the ETCP exams were visible throughout the Palais des congrès de Montréal.
On April 27th, at the Palais des congrès de Montréal, took place the inaugural administration of the French paper and pencil ETCP exams for theatre and arena rigging. This event was paired with another first, the administration for the first time of the English paper and pencil ETCP rigging exam in Montréal, thus marking a landmark for the ever first simultaneous administration of the paper and pencil ETCP rigging exams in both languages. More than twenty candidates from Québec took the exam, aiming to join the 800 plus ETCP certified riggers in North America.
In Québec, the ETCP program posed a problem : because the exams were written in English, Francophone candidates found themselves greatly disadvantaged if they did not sufficiently mastered the English language. Note that the exams include 150 questions plus 15 pretest questions and the time allocated to complete it is three hours.
For those reasons, CITT approached the ETCP Council in 2006 to obtain permission to translate into French the certification exams for Arena Rigging and Theatre Rigging. With the help of its Québec Section CQICTS, it then turned to the Quebec’s cultural human resources council (CQRHC) who prepared and filed the request for funding for this ambitious project at a provincial funding program for workforce development and the recognition of skills (FDRCMO). The project and its financing were approved in June 2009, the translation began in August 2009 and ended in March 2010.
The translation of both exams was validated by a group of subject matter experts, many of whom were certified riggers ETCP. A subsequent benefit of this impressive work is the creation of a bilingual glossary of terms used for rigging.
The French certification exams are available in the paper and pencil version, unlike the English examinations, which are available online as well as in paper and pencil version. In addition, the ETCP online practice exams of 50 questions were also translated into French and are available online since March the 1st at a low cost.
CITT will continue to work with its Québec section CQICTS in assuring that the French ETCP paper and pencil arena and theatre rigging exams be made available annually, notably on the eve of the opening of the EN COULISSE tradeshow, which is usually held in April, in Montréal. Our goal is to ensure an annual and recurrent administration of the French ETCP pencil and paper rigging exams in Québec.
The ETCP Council members are key leaders drawn from entertainment business, labor, facilities, associations, and academia representing the diversity of the entertainment industry. Membership includes AMPTP, BASE Entertainment, Broadway Across America, The Broadway League, Cirque du Soleil / MGM MIRAGE, CITT, Disney Theatrical Productions, ESTA, IAAM, IATSE, InfoComm, Live Nation, NBC Universal, PRG, SHAPE, TEA, and USITT. ETCP is an ESTA initiative created to promote industry safety.