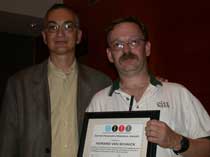 The 2002 Dieter-Penzhorn award for extraordinary service to CITT is awarded to Howard VanSchaick.

Any organization goes through peaks and slumps. Howard has twice led CITT out of a slump. Howard's first opportunity came seven years ago when he was elected Chairman of the Alberta Section. The Alberta Section, long active within USITT and CITT needed revitalisation. Howard stepped in and re-wrote the By-laws of the section to make it more effective. He also organized the first of Alberta's Workshop weekends at the EPCOR CENTRE for the Performing Arts. An intense weekend of workshops, this event spread interest in the CITT throughout southern Alberta and had a significant impact on National Membership.

Through his work with the Alberta Section Howard came into frequent contact with the National organization and discovered that it too was in need of a rebirth. Howard joined the National Board and quickly was elected President. As in Alberta, one of Howard's first tasks was to clarify the By-Laws and restructure the Board to make it more accountable. Howard also orchestrated an extremely successful National conference in Edmonton where he introduced the first CITT awards, creating an opportunity for us to honour our peers.

In the second year of his presidency Howard was faced with the task of restructuring the National Office, a task he undertook with his usual flair.

Howard has given many years of service and leadership to the Institute, we salute and recognize his dedication, guidance and friendship with the Dieter-Penzhorn award!